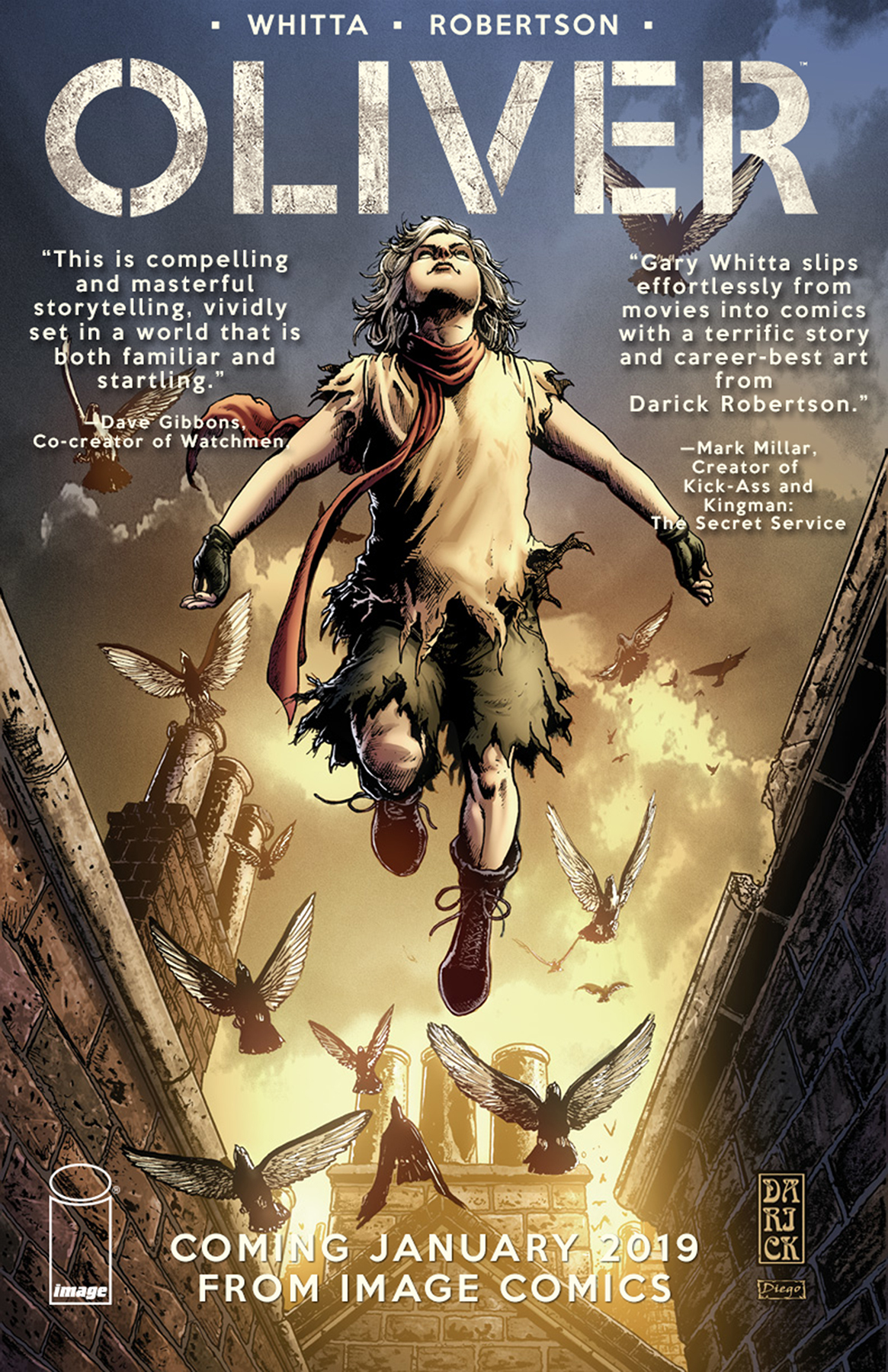 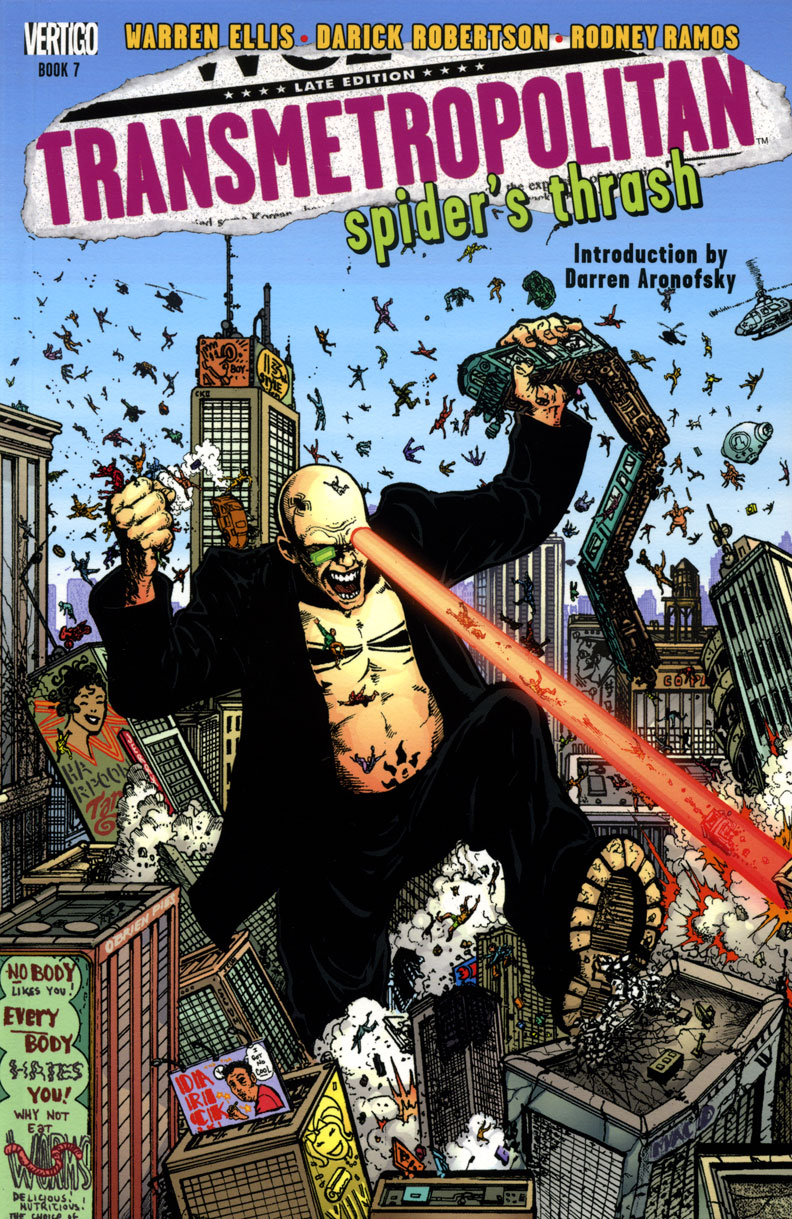 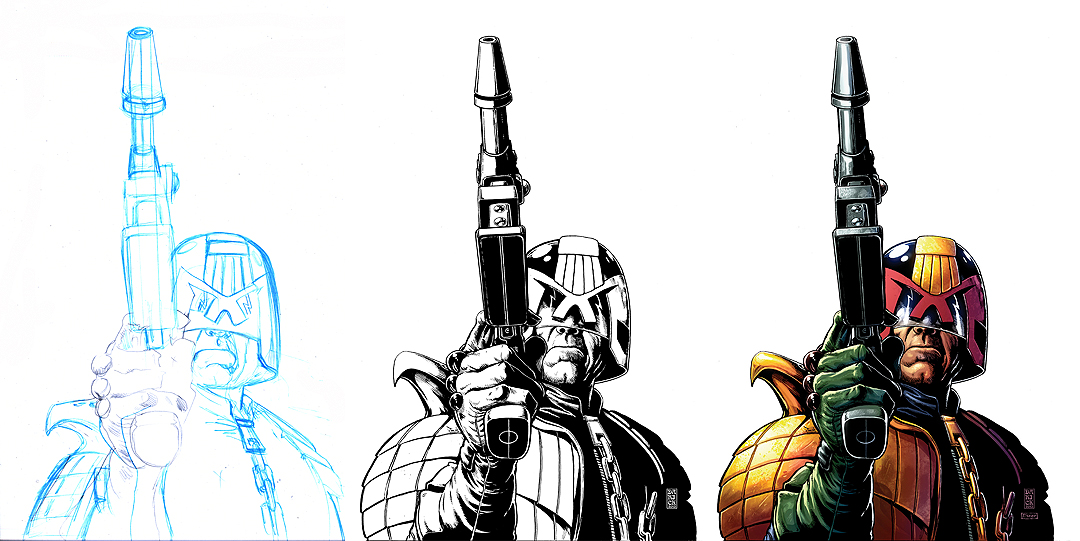 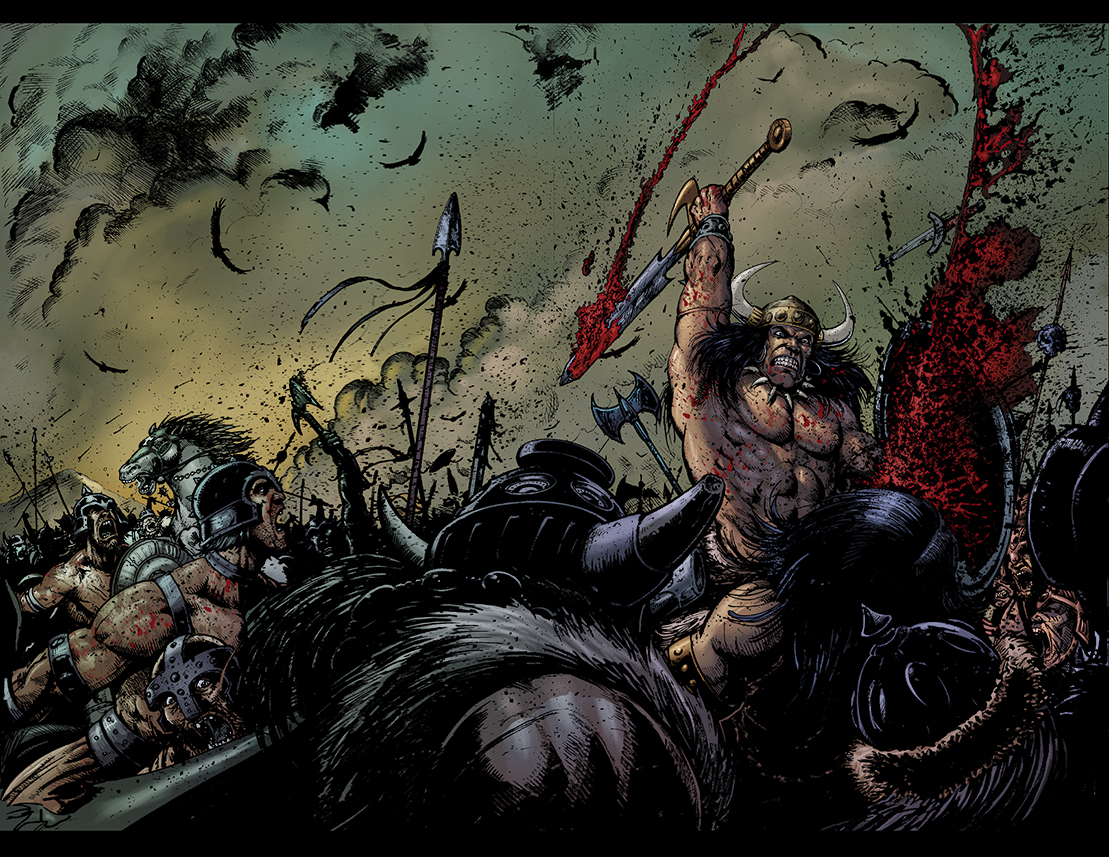 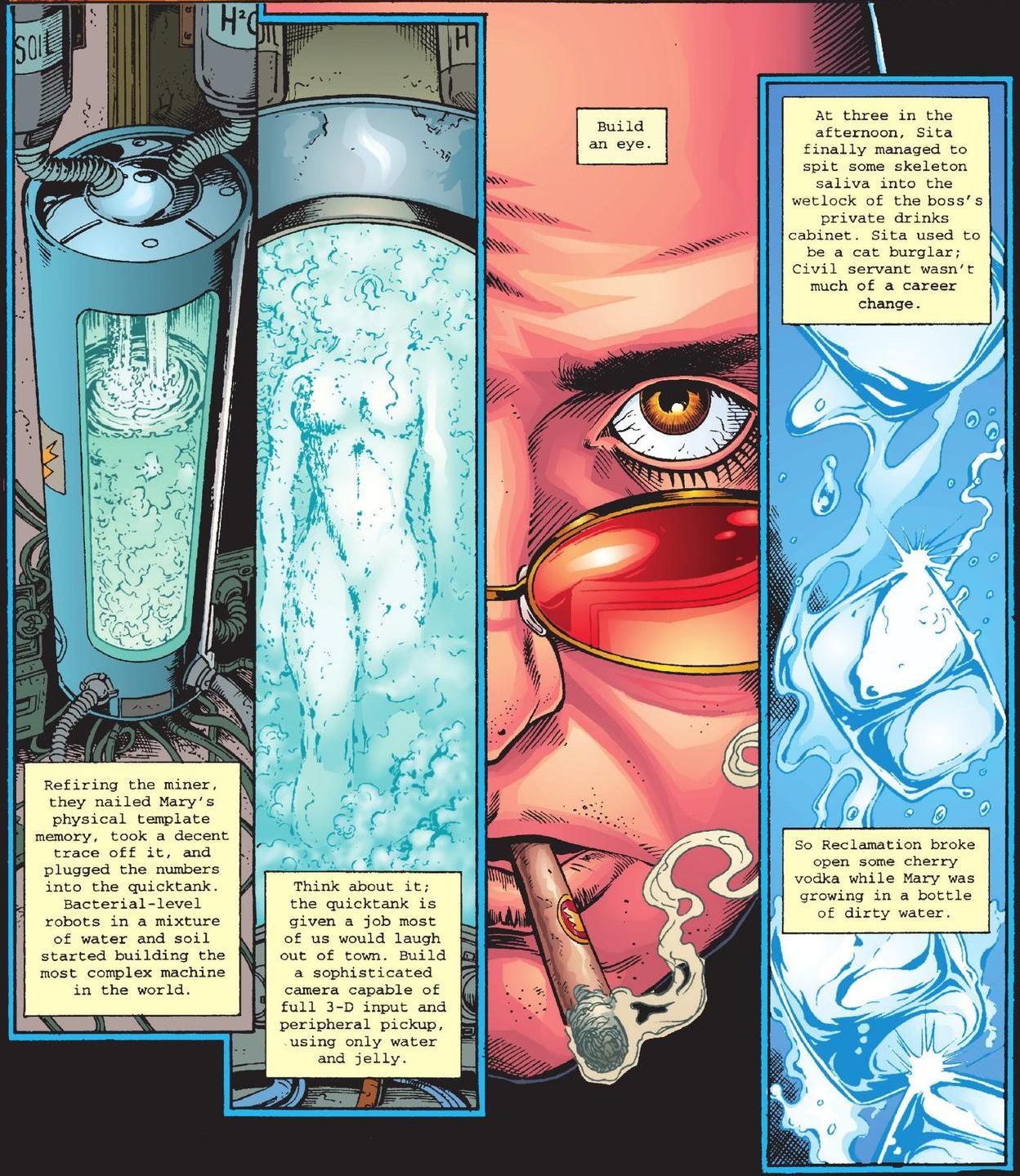 Hired professionally while still in high school, Darick Robertson has since built a prolific portfolio of gritty, cutting-edge work that spans over 30 years in the comic book industry. He has illustrated hundreds of comics, created dozens of characters, written many stories, and, most recently, co-produced TV adaptations of his creations. As a child, Robertson drew incessantly. The shower doors of his childhood home in Northern California, bore his youthful but unusually adept paintings of Bugs Bunny and Porky Pig from the time he drew them at the age of 7 until they sold the house when he was an adult. Around the same time, Robertson entered Post cereal drawing contests and won two 10-speed bicycles in two separate contests. The subject of his drawings —Green Lantern and his own creations of super villains. He was, and is still, rarely seen without a sketchbook in hand. Though he was almost exclusively self-taught, he did take a couple of high-school art classes and fondly credits his only teacher, Stan Grosse, for his work ethic. It was Grosse who said to him, “Darick, whatever you do, be an artist first. Don’t be a half-baked cartoonist.”

Robertson drew most of his first published comic, Space Beaver, in Grosse’s classroom at age 17. Tibor Sardy, owner of now-shuttered, Peninsula Comics, launched “Ten-Buck Comics” to publish eleven issues of Space Beaver, a black-and-white indie comic which to this day still has its own passionate following — so much so that after many fan requests Robertson drew Issue #12 in 2000 for PlanetLar Comics to finish the series. While finishing the first eleven issues and pounding the pavement to break into mainstream comics, Robertson worked graveyard for Diamond Distributors unpacking comics for “New Comic Book Day” and occasional afternoon’s for Sardy’s comic shop.

Robertson then found work with many indie comics’ publishers of the 1980’s such as Eclipse, Malibu and notably, Innovation, where he illustrated the Child’s Play 2 movie adaptation. This work lead to his first major illustrating job drawing several DC Comics’ Justice League titles. He was 22 years old.

In 1992, Robertson landed his first job with Marvel Comics drawing Wolverine, Issue #54. He continued to illustrate many classic mainstream characters such as Spider-Man, Wonderman, The New Warriors, and Justice League: Mid-Summer’s Nightmare (both with writer, Fabian Nicieza), Superman, The Punisher, Deadpool, Wolverine, X-Men, and Nightcrawler, to name a few. In 1995, he collaborated with writer and icon, Stan Lee on Spectacular Spider-Man Super Special #1. The story, inked by George Perez, is included in Marvel’s “Best of 1995” collection.

During a long run on Marvel’s New Warriors, Robertson expanded his career with Malibu’s Ultraverse Comics. There, he co-created and designed The Night Man, designed characters for The Strangers, debuted his original character and comic Ripfire and drew the first five issues of The Solution and drew issues of Prime. Towards the end of the life of Malibu’s Ultraverse, Robertson teamed-up with Warren Ellis on the short-lived title, Ultraforce.

In the malaise following the implosion of the comics industry in the mid-1990’s, Robertson juggled different super-hero titles with different companies. He became known in the industry to be a workhorse who could handle multiple projects at once, including covers, art for trading cards and toy packaging. Robertson again worked with Nicieza for the ironically titled, Spider-Man: The Final Adventure. During this time, Valiant Comics became Acclaim Comics and Nicieza was editor-in-chief. Nicieza reunited Ellis and Robertson for a one-shot comic titled, Man of the Atom. This work brought together the creative team that would deliver Transmetropolitan in 1997.

Transmetropolitan was Ellis’ original idea slated to launch as a DC Comics: Helix title. Helix was a short-lived science fiction line headed by Stuart Moore. After their work together on Man of the Atom, Ellis reached out to Robertson with the interest of having him draw the first three issues of the creator-owned title. Robertson, who wanted to work on an ongoing title with Ellis, joined as co-creator and ultimately drew nearly every page and many original covers for all of the 60-issue title and the collections. His work on the book birthed the now iconic Spider Jerusalem and the distinct visual world and characters of Transmetropolitan. While the book stayed less than a year with Helix, Moore and the team moved the book to DC Comic’s Vertigo line where it remained for the rest of the series. The title, nominated for an Eisner award for Best Continuing Series and Best Individual Issue in 2000, set in motion what would eventually become Robertson’s career outside of mainstream super-hero comics.

As Transmetropolitan wrapped up, Robertson and his wife temporarily relocated to New York where he subway-ed to and from the Marvel and DC offices delivering different projects. Most notably, he worked on Marvel’s Deadpool and Fury. Fury, which launched as one of the first of Marvel’s MAX line for mature readers, was the debut team-up of Robertson and writer, Garth Ennis. While the New York Post declared the comic, “Super Filth!” Rolling Stone lauded their gritty depiction of Nick Fury as “Cool Comic of the Year.” Robertson picked up an exclusive contract with Marvel where he and writer, Greg Rucka, relaunched a best-selling run on Wolverine. Robertson also worked on other high-profile characters including The Hulk, The Punisher (The Punisher: Born, with Ennis, in particular), Spider-Man and a solo-series for Nightcrawler written by Roberto Aguirre-Sacasa.

In 2006, Robertson stepped away from Marvel to co-create The BOYS with Ennis. Originally published by DC’s Wildstorm, the comic moved to Dynamite Entertainment in 2007. Between both publishers, The BOYS ran for 72 issues between 2006 and 2012. It became a critically acclaimed series, landed on “The New York Times Bestseller List,” received a nomination for the Eisner Award for “Best Series” in 2008 and dropped many jaws. In 2018, Sony Pictures adapted the comic for an Amazon Original Prime Series that is set to air in 2019. The BOYS showcased Robertson’s grittiest work setting his art well apart from his previous work on mainstream comics.

During his time on The BOYS, Robertson was also under contract with DC/Wildstorm Comics to create work for The Authority, The Exterminators, Midnighter and 52. After completing his contract with DC, he wrote and drew Conan: Weight of the Crown and three chapters of Conan and the Mad King of Gaul for Dark Horse Comics. He also drew many independent comics and covers that allowed for his newly-appreciated cutting-edge art.

In 2012, Robertson co-created Happy! for Image Comics. The four-issue miniseries is centered around an ex-detective and an imaginary friend. The story follows the unlikely duo as they seek to rescue a kidnapped girl. In 2017, NBC Universal and the SyFy network picked Happy! to adapt it for TV. Much of the first season uses images directly from Robertson’s art in the comic, most notably Happy himself — the imaginary blue “horse” known in the Robertson house as the “UniPixieSis.” Happy!’s second season is set to air in March 2019.

Though it remains a quiet title in his portfolio, Robertson co-created the sci-fi gonzo original title Ballistic. He created the comic with writer, Adam Egypt Mortimer, in 2013 for the fledgling publisher Black Mask. Though not well known in the mainstream comics’ bubble, Ballistic continues to be a critical darling for those who can get their hands on it. It was also one of the first of many collaborations Robertson would have that supported independent creations with writers and publishers new specifically to the comics industry.

In 2016, Robertson had a brief reunion with mainstream comics when Valiant Comics relaunched their label. His love of superheroes from his childhood and his early career resurged after doing several covers for the company. Robertson enjoyed a run with Valiant rebooting the popular title Harbinger: Renegades with writer, Rafer Roberts. His support of indie comics continued in the same years as Robertson worked with Matt Hawkins to create the 48 page comic DANTE, published by Top Cow Comics in 2016. In late 2017 Robertson completed his work with Valiant and returned full-time to his creator-owned projects and other independent projects —including a project that had been lurking in the wings for 15 years.

In 2019 the world saw the long-awaited release of Oliver, with writer Gary Whitta.  Oliver, a reinterpretation of Charles Dickens’ Oliver Twist, takes place in post-apocalyptic London. Issue #1 of Oliver launched in January 2019 to significant praise and many 5-star reviews. The book is set to run for 12 issues with Image Comics. Robertson and Whitta began their collaboration on Oliver over 15 years ago after many friendly exchanges where they bonded over of the lovelies of “geekdom.” Oliver is the longest-awaited collaboration of Robertson’s career… so far.

Currently, Robertson resides in Northern California with his wife, Meredith and two children, Owen and Andrew. To this day, Aragon High School in San Mateo uses his design and drawing for the Aragon Don mascot. He submitted the winning entry in the school’s drawing contest as a student in 1984.

Your cart is currently empty.